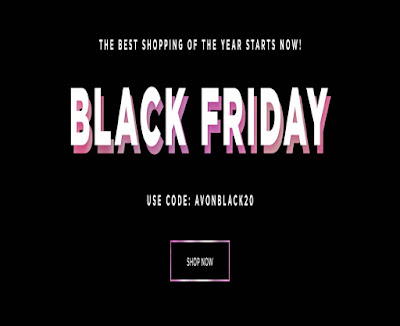 The Black Friday Discount Code for All Avon Products is on the image!!!!! 💬

This has been the year of change.  Many think change is bad, hard or something that they simply cannot deal with.  Change in life is always inevitable, and only for those that remain flexible, can change be considered a normal part of life.  Ok, so Covid has affected the world.  Its a fact that things are not the same as they were pre Corona.  Enough said about that.  It is the way that it is and this Black Friday will be unprecedented in history as the one where people stayed home and shopped online.

Tulsa Avon is the online promoting system for an affiliate system of the ultra successful Avon company.  Now that Avon has moved overseas does not mean that it has gone downhill.  As a matter of fact, the catalog is better than it ever has been.  The products are greater than ever before.  They are ready for shipping and all you have to do is learn to shop online @ https://bit.ly/shoptulsaavon for great gift ideas foir the whole family!

Now, some details from Wikipedia https://en.wikipedia.org/wiki/Black_Friday_(shopping) about the Black Friday of yesterday!

Black Friday is an informal name for the Friday following Thanksgiving Day in the United States, which is celebrated on the fourth Thursday of November. The day after Thanksgiving has been regarded as the beginning of the United States Christmas shopping season since 1952. The term "Black Friday" did not become widely used until more recent decades, during which time global retailers have adopted the term and date to market their own holiday sales.

Many stores offer highly promoted sales on Black Friday and open very early, such as at midnight, or may even start their sales at some time on Thanksgiving. Black Friday is not an official holiday, but California and some other states observe "The Day After Thanksgiving" as a holiday for state government employees. It is sometimes observed in lieu of another federal holiday, such as Columbus Day. Many non-retail employees and schools have both Thanksgiving and the following Friday off. Along with the following regular weekend, this makes Black Friday weekend a four-day weekend. Additional days off is said to increase the number of potential shoppers.

In 2014, spending volume on Black Friday fell for the first time since the 2008 recession. $50.9 billion was spent during the four-day Black Friday weekend, down 11% from the previous year. However, the U.S. economy was not in a recession. Christmas creep has been cited as a factor in the diminishing importance of Black Friday, as many retailers now spread out their promotions over the entire months of November and December rather than concentrate them on a single shopping day or weekend.

The earliest evidence of the phrase Black Friday originated in Philadelphia, where it was used by police to describe the heavy pedestrian and vehicular traffic that would occur on the day after Thanksgiving. This usage dates to at least 1961. As the phrase became more widespread, a popular explanation became that this day represented the point in the year when retailers begin to turn a profit, thus going from being "in the red" to being "in the black".

For many years, it was common for retailers to open at 6:00 a.m., but in the late 2000s many had crept to 5:00 or 4:00. This was taken to a new extreme in 2011, when several retailers (including Target, Kohl's, Macy's, Best Buy, and Bealls)[11] opened at midnight for the first time.[12] In 2012, Walmart and several other retailers announced that they would open most of their stores at 8:00 p.m. on Thanksgiving Day, prompting calls for a walkout among some workers.[13] In 2014, stores such as JCPenney, Best Buy, and Radio Shack opened at 5:00 p.m. on Thanksgiving Day while stores such as Target, Walmart, Belk, and Sears opened at 6:00 p.m. on Thanksgiving Day.[14][15] Three states—Rhode Island, Maine, and Massachusetts—prohibit large supermarkets, big box stores, and department stores from opening on Thanksgiving, due to what critics refer to as blue laws.[16][17][18] The Massachusetts ban on forcing employees to work on major holidays is not a religion-driven "blue law" but part of the state's Common Day of Rest Law.[19] A bill to allow stores to open on Thanksgiving Day was the subject of a public hearing on July 8, 2017.

There have been reports of violence occurring between shoppers on Black Friday. Since 2006, there have been 12 reported deaths and 117 injuries throughout the United States. It is common for prospective shoppers to camp out over the Thanksgiving holiday in an effort to secure a place in front of the line and thus a better chance at getting desired items. This poses a significant safety risk, such as the use of propane and generators in the most elaborate cases, and in general, the blocking of emergency access and fire lanes, causing at least one city to ban the practice. Environmentalists cite one more adverse factor: discount deals encourage people to purchase things they don't need, and this overproduction contributes to climate change.[23]

Since the start of the 21st century, there have been attempts by retailers with origins in the United States to introduce a retail "Black Friday" to other countries around the world. In several countries, local retailers have attempted to promote the day to remain competitive with US-based online retailers. 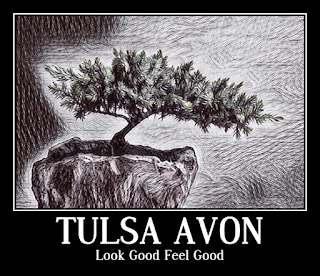 Who Is Tulsa Avon?

Tulsa Avon began some years ago. At that particular time, the owners of Tulsa Avon were committed to telling others about Avon products, and the value that they could provide people in finding the best skincare products found on the Planet today. The lotions, body washes, fragrances and all of the other products are just great, just as anyone knows who has tried them. We figured to earn a few dollars from promoting the Avon products on the web. Therefore, the term Tulsa Avon was born.

Selling anything on the world wide web today is tough. Whatever we do in the way of promoting and advertising on Google, there are millions of others doing exactly the same thing. Even though the techniques may vary a little, the end should always be that money is earned through the promotion of Avon products. Tulsa Avon makes no bones about this at all, and states right up front that we are here to make some money with an affiliate program!

There is Little More to the Tulsa Avon Story!

Its true, we do advertise and promote Avon products; however, we are also sold on the idea that the products are very good, inexpensive to purchase, easy to order, and do exactly what they ads say that they will do. In other words, we are products of the products we sell! So, when we write, build, create and promote our sites, products and social media outlets, we are doing so in a manner that everyone will know that the owners of Tulsa Avon also use the products they promote!

The owners, creators, promoters and advertisers of Tulsa Avon are concerned with Internet security and safety. Privacy is of primary import ance. All of the information, images, links and articles presented on Google are proven safe and secure. We take very much time energy and effort into our business model on the world wide web. We are experts at Internet privacy and security and take our business very serious in this manner.

For reasons of convenience and customer satisfaction, we choose to use many third party applications and social media groups. We use Bit.ly link shortening services to make our links easier to use. We use Facebook, Twitter, Pinterest, Instagram, YouTube, Prlog.org and other third party social media and article posting services to promote Tulsa Avon effectively with. We use the Blogger.com blogging system for most of our articles and image hosting as the domains and plans there give us the most benefits for the money spent on the project.

What Does All This Mean for the Customer?

The goal of Tulsa Avon is to make sure that anyone that visits our sites, buys our Avon products and uses them to help live better lives will always be satisfied that they have done business with people care about what they do on the world wide web. This is all about making the Internet safer and more secure for everyone to use, enjoy and shop with. Than each and every one of you who have taken the time and made the effort to view our information and buy our products! Your business is much appreciated!

Email ThisBlogThis!Share to TwitterShare to FacebookShare to Pinterest
Labels: black friday 2020 black friday from tulsa avon follow the directions on the image get the code from the image discount code tulsa avon shop tulsa avon

A New A Box Has Bloomed